A person’s tone of voice can tell you a lot about how they’re feeling. Not surprisingly, emotion recognition is an increasingly popular conversational-AI research topic.

Emotion recognition has a wide range of applications: it can aid in health monitoring; it can make conversational-AI systems more engaging; and it can provide implicit customer feedback that could help voice agents like Alexa learn from their mistakes.

Typically, emotion classification systems are neural networks trained in a supervised fashion: training data is labeled according to the speaker’s emotional state, and the network learns to predict the labels from the data. At this year’s International Conference on Acoustics, Speech, and Signal Processing, my colleagues and I presented an alternative approach, in which we used a publicly available data set to train a neural network known as an adversarial autoencoder.

The compact representation — or “latent” representation — encodes all properties of the training example. In our model, we explicitly dedicate part of the latent representation to the speaker’s emotional state and assume that the remaining part captures all other input characteristics. 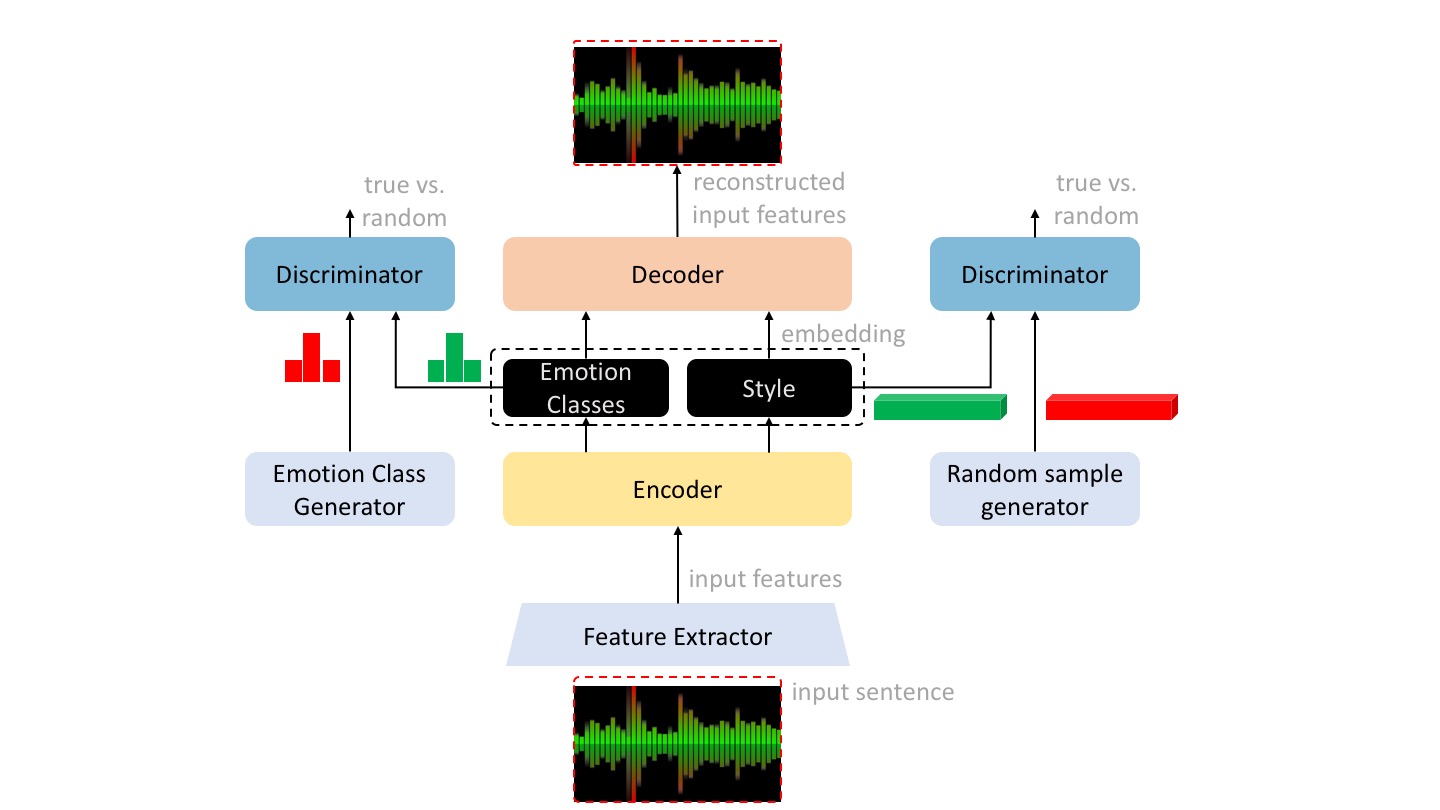 The architecture of our adversarial autoencoder. The latent representation has two components (emotion classes and style), whose outputs feed into two adversarial discriminators.

We conduct training in three phases. In the first phase, we train the encoder and decoder using data without labels. In the second phase, we use adversarial training to tune the encoder.

In so doing, the encoder learns to produce representations that fit the probability distributions. This ensures that it will not overfit the training data, or rely too heavily on statistical properties of the training data that don’t represent speech data in general.

In the third phase, we tune the encoder to ensure that the latent emotion representation predicts the emotional labels of the training data. We repeat all three training phases until we converge on the model with the best performance.

For training, we used a public data set containing 10,000 utterances from 10 different speakers, labeled according to valence, activation, and dominance. We compared the performance of the proposed learning method and the fully supervised learning baseline and observed marginal improvements.

In tests in which the inputs to our network were sentence-level feature vectors hand-engineered to capture relevant information about a speech signal, our network was 3% more accurate than a conventionally trained network in assessing valence.

When the input to the network was a sequence of vectors representing the acoustic characteristics of 20-millisecond frames, or audio snippets, the improvement was 4%. This suggests that our approach could be useful for end-to-end spoken-language-understanding systems, which dispense with hand-engineered features and rely entirely on neural networks.

Moreover, unlike conventional neural nets, adversarial autoencoders can benefit from training with unlabeled data. In our tests, for purposes of benchmarking, we used the same data sets to train both our network and the baseline network. But it’s likely that using additional unlabeled data in the first and second training phases can improve the network’s performance.

Viktor Rozgic is a senior applied scientist in the Alexa Speech group.